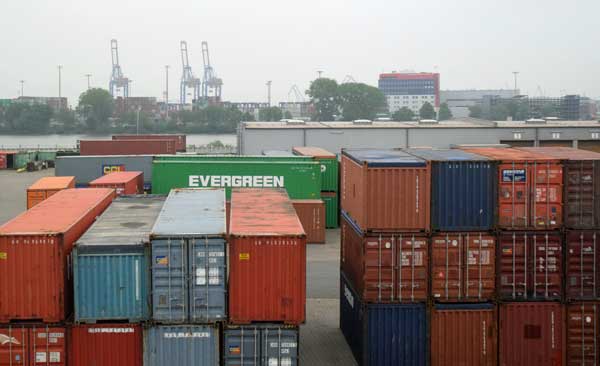 Globalization: the ignorance of the facts

"There are also some losers in globalization," concedes the capital lobby. What a scorn! What a tremendous understatement!

Despite the economic decline in high-wage countries, which has persisted since 1980, the privileged establishment blatantly sells globalization as a success story. How do you do that? Quite simply: by "processing" and styling statistics beyond recognition. In other words, turning white into black.

1. The trick with unemployment statistics!
Germany has a potential of about 50 million workers. But there are only about 30 million jobs requiring insurance coverage (including many low-paid part-time and hourly jobs, temporary work, etc.). The shortage is obvious.

In order not to frighten the people's soul and to show success in employment, the facts are well worth the effort. For example, long-term unemployed people over 58 years of age are not counted in the first place (it is simply too many). As well as those who are sick, have low employment, no Hartz-IV entitlement, and so on. You can find a detailed description here.

It would be interesting to know how many paid full-time jobs actually exist. But such misery figures are apparently kept secret.

2. The trick of increasing prosperity!
Because people are apparently thought to be stupid people, they are also being persuaded to believe in income development. For example, by ignoring the inflation rate, using gross instead of net wages, including billionaires in the average wage, and so on.

If you calculate fairly, almost all of the old industrial nations have seen a hefty drop in income since 1980. Not only salesmen, butchers, truck drivers, electricians, etc. are affected, but academics - doctors, pharmacists, teachers, lawyers, architects, engineers - are also feeling the decline. You don't believe me and want to know more? Please....
It should be borne in mind that productivity has doubled since 1980. The benefits of technological progress and work compression have completely disappeared! Simply incredible!

3. The trick with the small calculation of the inflation rate!
The inflation rate can also be easily manipulated and nicely calculated. At present, the inflation rate in Germany is stated to be 0.5 per cent - I, on the other hand, see it at four per cent.
What the aim of the low inflation rate is clear: it frustrates the right to higher wage increases and deceives a rise in prosperity that in reality does not even exist. And it also legitimises the ECB to continue the glut of cheap money (zero interest rate policy) unreservedly.
Can you give me more detail? Surely....

4. Pure national dumbing: "In 25 years, there has been an increase in prosperity of 27,000 euros."
How stupid and naive are we supposed to be? Do some economic experts no longer have any sense of shame? Yesterday, the television viewers were seriously undermined in a documentary documentary, claiming that globalisation would have led to a 27,000 euro increase in prosperity between 1990 and 2014.

Are you all right? How weird is that? Unfortunately, he didn't reveal how the good man can get these dream figures. I suspect it is derived from GDP (gross domestic product). And it does not take inflation into account and also completely ignores the development of net wages and purchasing power.

But even with an honest assessment of the inflation rate, gross domestic product is not a good indicator of the change in living conditions. Because it involves a hodgepodge of economic performance, whether meaningful or counterproductive.
Ordinary citizens, for example, has very little of it, if enormous sums of money are increasingly flowing into advertising, goods tourism, the redevelopment of EU states, the reception of economic asylum seekers or the escalating bureaucracy. In addition, the formulas for calculating GDP are also changed from time to time ("adjusted over time"). Reliable comparisons are therefore hardly possible.

The German trade surplus (2014:310 billion euros) in which globalizers are so fond of intoxicating themselves, also means very little - if the figures are correct at all. The question is: what happens to this surplus (it should have swayed to several trillions of euros over the decades)?
Does the average citizen have the slightest advantage? Where did all that money end up? Was it used in the end to invest in foreign companies or to build huge factories abroad (in order to be able to outsource more and more of the expensive German production)?

The bottom line is that what counts is not GDP or the trade surplus, but the real development of income, prosperity and living standards. Anything else is eyewash.

5) Globalisation led to a glut of cheap money!
Anyone who still praises globalisation today as promoting prosperity is, in my opinion, a dreamer, a lobbyist or has serious perception problems. Because it's already proven: The house of cards of uncontrollable globalization (turbo-capitalism) can only be saved from disintegration by a gigantic flood of cheap money. The collapse of the global economy can only be halted by the adventurous "zero-interest policy" economic stimulus program.

But how long can this go on for, how do you get out of this number? It undermines the principles of the market economy and deceives governments and humanity about the seriousness of the situation. I'm afraid this is going to end badly.

6)"Every country should produce what it does best!"
Is it not sweet how the centuries-old dogmas of Mr Smith and Mr Ricardo are still being adhered to? The outdated doctrine from the primeval times of capitalism has long since been refuted in practice. Apart from some exotic foodstuffs and luxury foods, today almost everything can be produced anywhere on earth in the same quality.
It's not about the "better"anymore, it's all about the "cheaper"! The production of textiles, TV sets, cameras, mobile phones, office machines, etc. has not shifted from Germany to foreign countries because people elsewhere are better able than we are, but because they make it cheaper.

But that was not what Adam Smith and David Ricardo were concerned about (at that time, the world wage level was fairly uniform at the lowest level). It seems to me that Smith and Ricardo, who today are no longer able to defend themselves against misuse as a justification for modern wage and tax dumping, seem more than miserable.

7. "We must redistribute more!"
Since it is admitted that there are "some" losers of globalisation, economic experts are generously calling for greater redistribution. That sounds good, but it's not.
After all, redistribution is in principle to the detriment of normal and better earners. You can't catch the really rich and wealthy. If the tax burden were too high, this would simply be chased out of the country (which would be absolutely counterproductive). Many states have already worked their way through "wealth taxes" and have failed miserably.

But even the average and high-earners cannot be milked indefinitely. The higher the tax burden, the lower the willingness to perform. There's a pain threshold for everyone somewhere. If work is no longer worthwhile, the consequences are drawn (does Hartz IV or goes abroad). Many Hartz IV families are already doing better than double-earner households. Do we want to pervert this anti-social injustice system even further?

I see the call for more redistribution as a staged distraction manoeuvre: it offers bogus solutions to persevere with the absurd free-trade mania (at globalisation).

Background and analysis:
• German Political Encyclopedia: independent & non-partisan
• Do doctored statistics and state propaganda form the basis of our democracy?
• Poverty research: Which countries with high birth rates are really doing well?
• The infiltration of democracy by the Cancel Culture movement …
• The nasty tricks of the anti-democrats!
• Causes and consequences of global economic crisis
• Does Donald Trump initiate the end of globalization?
• The political and economic consequences of an brexit An analytical consideration from German view.
• Germany: The brazen proclamation of skills shortage!
• The failure of the West - Result of the free trade ideology?
• How honest is the German unemployment statistics?