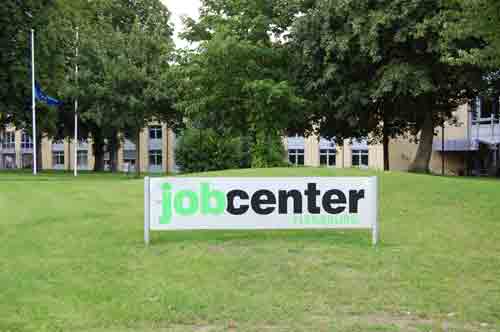 How honest is the German unemployment statistics?

Deceptive unemployment statistics:
The ECB is flooding the market with cheap money!
The European Central Bank can generate new money to its heart's content and then launch this money on the markets to stimulate the economy. The consequences of these dubious machinations are not only escalating national debts and speculative bubbles, but also "premature" economic revival on credit. Due to the low interest rates, private individuals and companies merely prefer to invest - the economic slump thereafter will be all the more severe.

Deceptive unemployment statistics:
Example: It is being built and renovated like never before!
At normal times before globalization (before 1980), 8% interest-bearing mortgages were the long-term average. Today, the offers range between fabulous 1 and 3 percent. The historically low interest rate does not have a natural background. It was manipulated by the ECB lending freshly printed money to banks for 0% - below inflation. A respectable mortgage rate would have to be around 5-6% today (inflation rate + default risk + processing costs + profit margin).

First of all, all savers, life insureds, etc. are suffering from this (artificially induced) flood of money, because they are all gradually being expropriated (interest rates are below the inflation rate).
Some savers try to escape this vicious circle by making risky investments, which in turn drives speculation and makes the global economy increasingly insecure.

Thanks to the artificially created dumping mortgages, we are of course building like crazy at the moment, because every potential builder wants to take advantage of the abnormally favourable conditions.
The consequences of this (in my opinion irresponsible) economic policy on the part of the central banks: following the construction boom, we are plunging into the depths that we have been experiencing in Spain for about seven years, for example. The low mortgage interest rates are no longer of any use there either, because there is an excess supply of houses and apartments and in a climate of high mass unemployment and insecure jobs, hardly anyone can get into debt and bind themselves in the long term.

As a further consequence, the rapidly generated low-cost money of the central banks (which is even used to buy dubious government bonds) damages long-term confidence in the affected currencies. No one can say when such a constant decline in values will turn into a mass panic, as Germany experienced in the early 1920s (hyperinflation).

Central banks, which for years lend money they have generated themselves to banks far below the inflation rate, are playing with fire!

Deceptive unemployment statistics:
Other causes of the "employment miracle"
includeOf course, there are also other causes for the "good" figures in the unemployment statistics. In Germany, we have been experiencing a completely unnatural decline in real wages and pensions for 35 years. Obviously, this is because technological progress has doubled productivity in the same period.
It is logical that Germany, with its wage restraint, has defeated many Western competitors. But this disgusting cutthroat competition does not offer a lasting solution and will cost us dearly to come to a halt (custom cuts and rescue packages for other EU states).
According to official statistics, the number of open-ended employment contracts in Germany fell by a further 19% to below 50% between 1999 and 2009. This phenomenon also shows how the labour market actually stands today (generation internship).

Deceptive unemployment statistics:
The euro leads to currency dumping!
If Germany still had its DM, its external value would be higher - imports (and thus also raw materials) would be cheaper and exports more expensive. Then the absurdly high trade and current account surpluses that drive other EU countries to despair would also be significantly lower.
The euro as a one-pot currency prevents the German economy from being valued in line with market conditions because the euro-crisis countries are pulling down the currency. The alleged success of employment is therefore also linked to disgusting monetary dumping.

Deceptive unemployment statistics:
Reversal of standards!
What was it like back then, in January 1993? At that time, three million unemployed people were still considered an absolute disaster, justified by the adjustment difficulties in the new German states. The January 1993 figures were presented as a temporary state of emergency. They promised to solve the problems as soon as possible.
And today, after 23 bitter years, the return to the horror figures of that time is celebrated as a bombing success. However, as already mentioned, the official figures have hardly anything in common with reality thanks to sophisticated balance sheet cosmetics and changes in the calculation bases.

Deceptive unemployment statistics:
Soon the invoice will be presented to us!
Current employment successes can lose their foundations at any time. Then we will see what permanent damage the adventurous market manipulations have caused and what kind of unemployment problems we actually have.

Supplement July 2016:
The trend has consolidated and interest rates have been further reduced. Banks now pay penalty interest when they park their money at the ECB. And there is now another economic stimulus package:
Several hundred thousand Germans are now busy caring for, supporting, housing, training and integrating the millionaire army of refugees. The unemployed asylum seekers, on the other hand, hardly appear in the statistics.

Supplement September 2016:
It is already being considered in all seriousness to penalise private savings with a negative interest rate of 5 to 6 percent annually in order to overcome the next financial and economic crisis (which is apparently considered unavoidable) while at the same time cutting back on cash (so that citizens do not hoard their money at home). The aim is to encourage the population to spend money.
These considerations show the thin ice we are currently on. The world is upside down - and we believe that we are safe and we believe in the sustained success of the irresponsible acts of desperation (cheap money floods, the purchase of corporate and government bonds by the ECB, currency dumping, etc.).

Background and analysis:
• German Political Encyclopedia: independent & non-partisan
• Do doctored statistics and state propaganda form the basis of our democracy?
• Poverty research: Which countries with high birth rates are really doing well?
• The infiltration of democracy by the Cancel Culture movement …
• The nasty tricks of the anti-democrats!
• In Germany wages have been falling since 1980. Why?
• Germany: The brazen proclamation of skills shortage!
• Globalization: the ignorance of the facts
• The political and economic consequences of an brexit An analytical consideration from German view.
• "We have to explain Europe better!"
• When will the Dexit? (the withdrawal of Germany from the EU)